Implementation in Back Office:

In the current system, users are only allowed to access either the tip out based on percentage of sales or the manual tip sharing.

Users are allowed to access the tip out/tip sharing settings.

User can enable both “Tip Out based on percentage of sales” and “Manual Tip sharing”.

The tip out distribution should only take place after the employee is clocked out and after the cashier-out process.

The percentage of tip defined for the employees should not be included in the tip sharing until or unless they did clock-in and clock-out. In the Tip Out/Tip Sharing the disclaimer need to be included                   intimating the same.

The current work flow should be defaulted for the manual tip sharing.

Only authorized users are allowed to edit the tip out value.

Alike tip adjustment, users are allowed to do adjustments with the tip out performed.

Incase of forced punch-in/punch-out, there arises scenarios to adjust the tip out value.

A new tab “Tip Out” should be included in the Tip Adjustment screen.

User can select the business date and the employee to perform the tip out adjustment.

Only the employee who performed both clock-in and clock-out on the chosen busines date should be shown in the employee field. 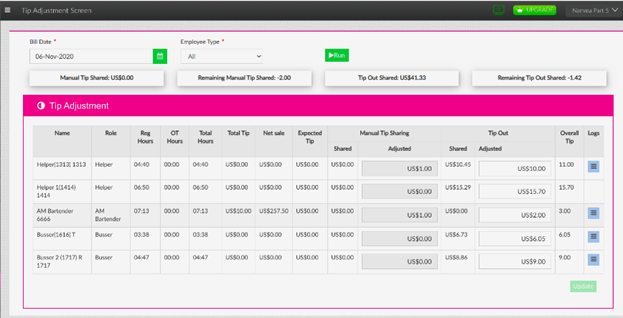 Implementation in the Payroll Report:

A new column “Tip Out” should be included in the payroll report.

Also, a new toggle option “Tip Out” should be added.

User can enable the toggle to include the tip out column in the payroll report generated.

The tip out values for the selected time period should be displayed for the respective roles that go into the tip out sharing.

The overall total tip should be the addictive value of tip adjusted and the tip out distributed.

Enhancement need to be done in calculating the credit card tip.

The credit card tip value should show purely the applied tip and it should exclude the service fee for that card.

The revised calculation needs to be defaulted in the payroll report.